Yet another recipe emerged from kids asking mummy to make healthy snacks but this time using chocolate as they are little chocoholics.??

I have made these super nutritious chocolate-clusters a few times and every time I used different ingredients, as you can mixing ingredients according to what you have around the kitchen and there are lots of things you can put in such as dry fruits, raisins, golden berries, seeds (pumpkin, sunflower, pumpkin, sesame etc.

I like all these super powders such as chlorella, Lucuma, Maka powder which I’m very much into for the past couple of years. I get those in whole-foods store and they are just superb source of vitamins, minerals, proteins and so on, but allow me just mention few things about chlorella for example as I’m fascinated by this.

Chlorella has been chosen by NASA to be one of the first foods grown on the space station, and Japanese people believe is so good that they’ve turned it into no 1 food supplement to be taken on daily basis.

I’m sure unless you know about it, you’re now asking yourself, but what is this chlorella?! ?

It is a freshwater green algae that has been studied and widely agreed by researchers that it is one of the most powerful super foods we can nourish our bodies with. It boosts our immune system, it stimulates digestion and the production of interferon (natural proteins produced by the cells of the immune system to fight against viruses, parasites and tumors). It is believed that they are one of the body’s most potent defences against cancer.

Chlorella powder, one of the ingredients in these choco-clusters

But what really captured my attention and fascinates me about this algae is that its fibrous outer shell binds with the heavy metals in the bloodstream and assists in pulling them out of tissues to carry them out of the body. How amazing is this?! ???

I’m just going to continue with the recipe now …. ?? 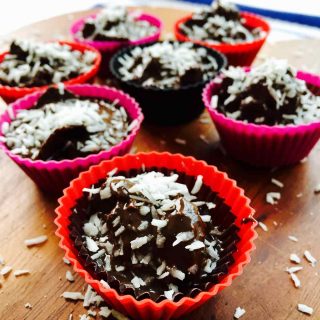 You can use an ice cubes mold-tray, if you haven't got the mini cupcakes cases.