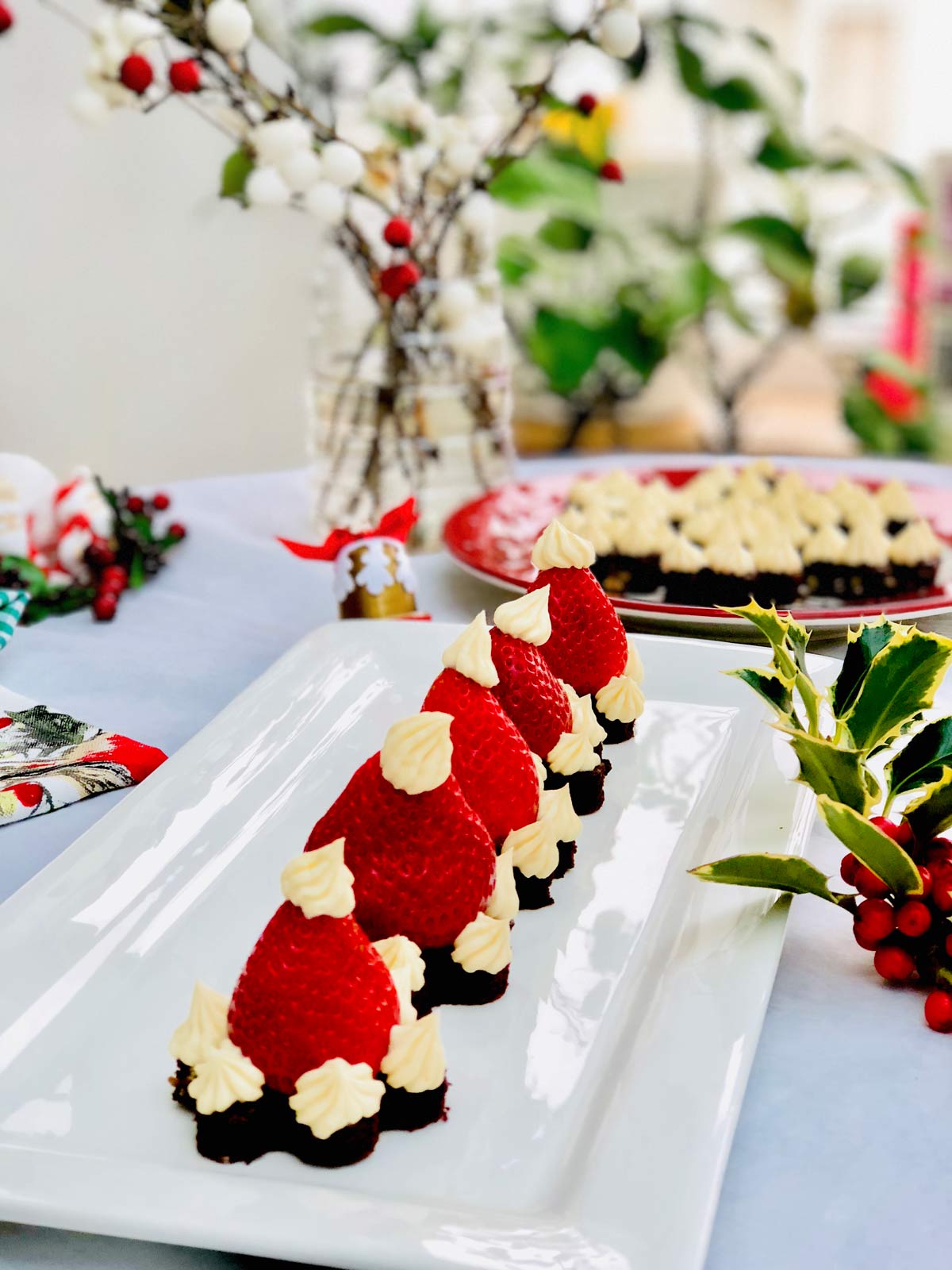 These cute little things came about a few months back and the idea or recipe had to come out now fit for the perfect time of the year when the cute hats will suit perfectly and make Santa ? such a happy man!

Kids really made me laugh saying that Santa “looked after them” with presents for so many years and now it is their turn to return the rewards Ho Ho Ho ?ha ha ha. They are so right, Santa did a great job ?

We were trying all sorts this summer within the efforts of mastering the brownie recipe and these emerged out of my daughter’s imagination. Nicole is very artistic and such a good hand in the kitchen. Andrei also really loves spending time in the kitchen lately, really keen and enthusiastic to help.

He started to cook and baking all sorts in school and he greatly enjoys it. I must say I’m very proud of his both cooking and baking skills as everything he’s made so far was great with no failings so far. He always brings everything home for us to try and give him a verdict on the outcome. How sweet is that?! ? In fact, the brownie in this recipe was 90% made by him.

I do enjoy having the kids around the kitchen helping or doing things and what I like the most is that they’re very good at what they do and have a lot of kitchen sense and skills somehow.

Great stuff so, get your young ones to help with this recipe – it’s those precious and such special and wonderful Christmas times they will never forget.
Making Christmas a magical family time that kids will cherish forever.

Of course you could use already made brownies either previously baked or go the naughty way with using shop bought ones to save time and you will have those ready in a fraction of the time.

Let’s get these hats ready and make Santa a super happy bunny!? 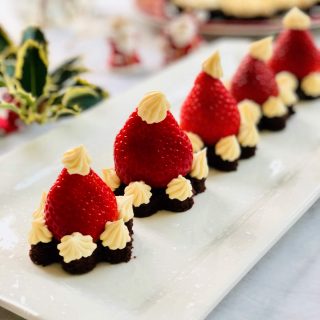 • This recipe makes anything between 16-20 pieces depending on how you cut them. Try and cut them as neatly as you can and as next to one another as possible so you make the most of them with not much “waste”. No excuses for early brownie munching on the premise that you cut them badly!! Do a neat job please • With the left overs you could make another dessert with cream fruits and brownie crumbs (if any left) • Depending on what shape you use or want to cut those into, I would recommend you chop the nuts slightly smaller to put inside the brownies and the more rough ones sprinkle on top so when you cut your little hats base you don’t get it messed up by a big chunky nut getting on the way spoiling its shape. The top ones you can see and work around those. This is called experience. . However, if you are using just a simple round cutter this will not matter so much. • The Baileys thick cream you could buy ready made or make it yourself by simply mixing 2-3 tbsp Baileys into 200ml cream and 40g or more of sifted icing cane sugar. It is simply delicious. Take my word for it. • For the children I make a separate batch and I add rum essence instead of Bailey’s cream since this is a boozy option even though it is not much of it. My kids really love the rum flavour and aroma but also vanilla or a boola boola cream (cream, sugar and freshly squeezed lemon) will do an absolutely fab job. 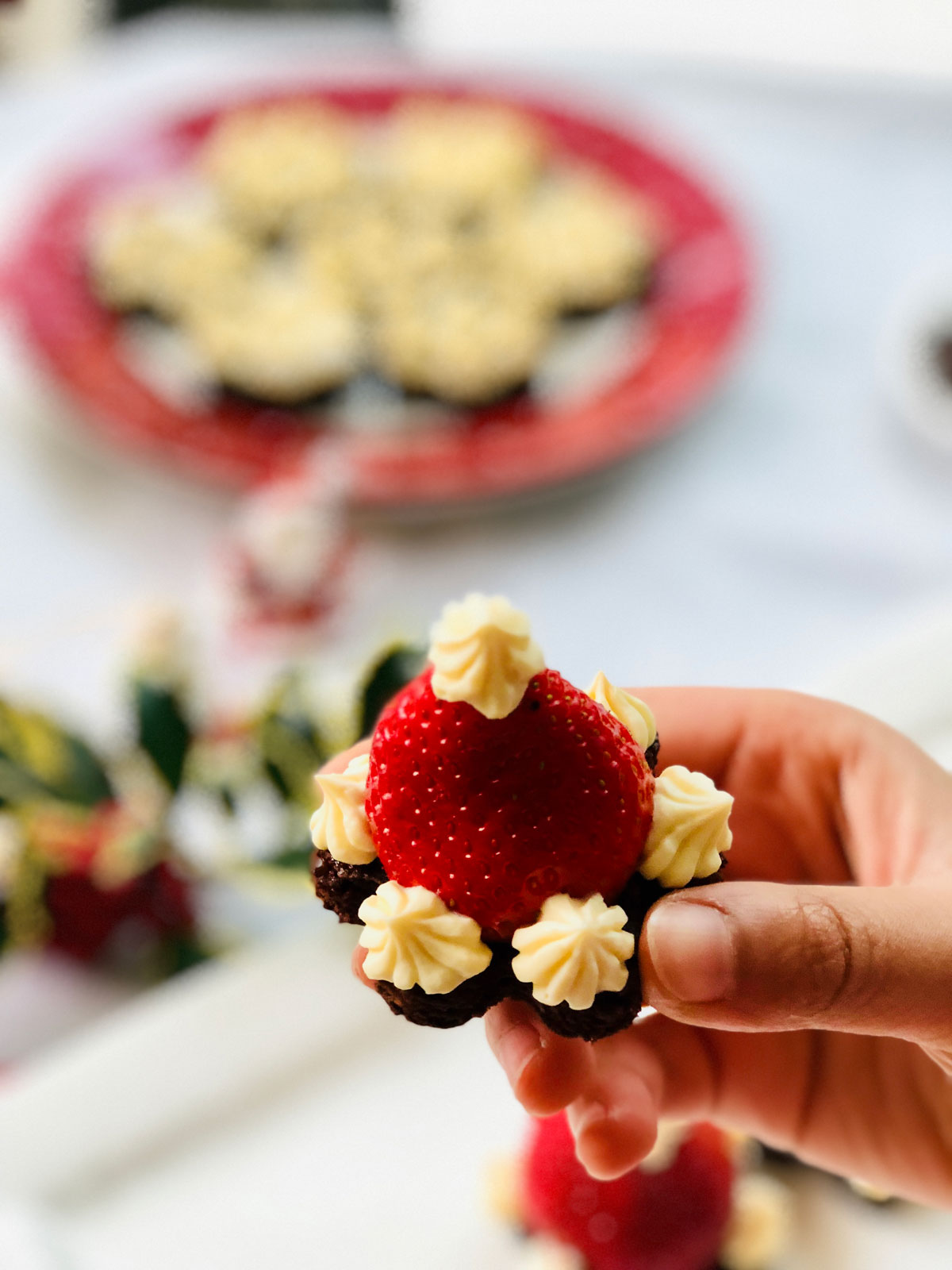 Previous Post: « 25 Most Desired Recipes to Cook or Bake This December – Something For Everyone
Next Post: Brussels sprouts, cranberries and bacon salad »