Oh, how I love these delicious cinnamon rolls with homemade jam. It is the flavour of paradise - simple and absolutely divine every single time. Cinnamon rolls also known as cinnamon bun, cinnamon swirl, cinnamon Danish, cinnamon snail, sticky rolls, sticky buns or scrolls. It all depends on where in the world you are but they are divine and have a national day in Sweden which is the 4th of October.

No matter what they are known as and what they are called, these cinnamon rolls are absolutely delicious, especially when made from scratch and using healthier flour and a good old homemade jam to fill these with. Oh, just divine! I have used forest fruit jam and a divine apricot jam, both homemade but any jam you like will do just great here.

You may ask yourself, are these delicious? Well, yeasss!! Just try this recipe.

Are they healthy? well, healthier, yes since I have cut the icing (not to say you cannot have it) and added some nice spelt flour, chia seeds and have not overdone with the sugar amount.

Please see the rest of the recipe for some real tips on some icing ideas, how to store, how to freeze these cinnamon rolls, how to make these ahead in case you need to and so on. Follow this recipe for great tips and cook's advise.

Origins of the cinnamon rolls

How do you make cinnamon rolls?

This is how you roll, spread, sprinkle and then roll again 😉

This is how you roll and cut your cinnamon rolls, cut into 1 inch or 2.5 cm thick rolls.

What to fill cinnamon rolls with?

The most popular filling is of course the cinnamon filling:

One other filling that I have used and it was unbelievable was :

Or why not use this raspberry filling we love so much:

I could go on and on with the fillings) but these listed ones here are our most favourite ones.

What icing shall I use for cinnamon rolls?

Any icing you like, I used a light dusting of icing sugar but you may use an icing made from milk, icing sugar, vanilla or cream cheese, vanilla and honey or maple syrup. You may also use some jam to spread over.

One other simple way to serve these beauties, I particularly like this as I do not like anything too sweet, it's with a dollop of creme fraiche and a drizzle of honey! The best if you ask me.

Combine the sugar and lemon juice in a mixing bowl and whisk until smooth. Stir in the vanilla. Add a splash of milk or cream as needed to reach your desired consistency. Drizzle over the cinnamon rolls while still warm. 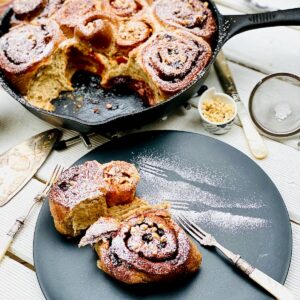 The best cinnamon rolls you will ever have. Made from scratch, fluffy, soft and truly delicious. You’ll never need any other recipe once you try this one! See recipe to learn how to make these overnight or ahead of time and how to freeze them.
5 from 45 votes
Print Pin Rate
Course: Breakfast, Brunch, Coffee time, Dessert
Cuisine: European Cuisine, Mediterranean
Prep Time: 20 minutes
Cook Time: 40 minutes
Proving Time: 40 minutes
Total Time: 1 hour 40 minutes
Servings: 6 servings
Calories: 678kcal
Author: Ramona Sebastian

To allow the dough to rise until it doubles, you need to set it up in a nice warm place and if you want this to rise a little quicker, turn on the oven to the lowest setting for a couple of minutes or so. Then turn off the oven and place the dough to rise in there. It normally takes about 30 minutes for the dough to rise nicely.

The finished product here, oh I now drool all over my keyboards, really want a bite of this although only just made them the other day and I can still taste them. I particularly love the chia seeds in the dough and the bite from these. The sour-sweet filling and the toasted mixed nuts, oh, what a dream! I am making them again this weekend! 😉

can I freeze cinnamon rolls?

Yes, absolutely! Freeze after baking - You may bake them for a shorter time initially to allow them another good 15-20 min back in the oven when taken out of the freezer. Freeze before baking - You can also choose to not bake them at all and freeze straight after cutting them into rolls and bake for an extra 5 minutes straight from frozen.

How to make overnight cinnamon rolls

After rolling the cinnamon rolls up, cut them, arrange in designated pan that was greased or lined with parchment paper, cover well with cling film or plastic wrap then place in fridge overnight. When you are ready to bake, bring the cinnamon rolls to room temperature and let them rise for at least 1 hour before baking.